While this device is not officially supported by DD-WRT, I was able to get it up and running just fine with an older BIG firmware.

As with any hardware hacking tutorial, you do this at your own risk! If you make a new shiny brick, it isn’t my fault.

1. Login to the web-interface for your router from a device connected via ethernet.   extract the .chk file and flash it to your router.

UPDATE – MARCH 2015 – There is an official build of the initial CHK file for the WNDR3700v3 that can be downloaded from HERE.

2. After reboot, do a 30/30/30 reset and log into the newly installed DD-WRT web-management interface. , extract the bin file and flash it to your router.

UPDATE – MARCH 2015 – There is an official MEGA build for the WNDR3700v3 that can be downloaded from HERE. If you do not need all the features of the MEGA build, you can install the MINI version which is available HERE. 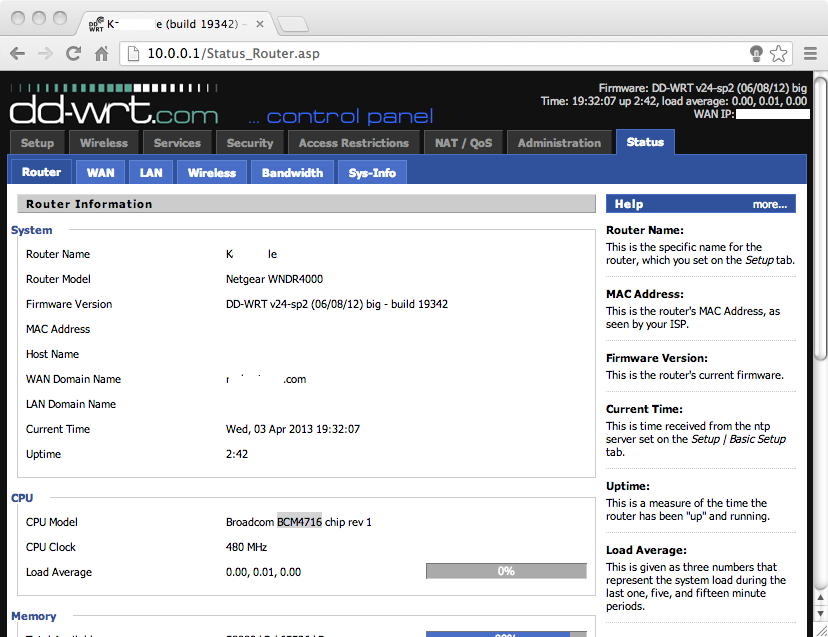 The beauty of the BIG firmware is the ability to do WiFi HotSpot configuration as well as other fun stuff like running the Transmission BitTorrent daemon and setting up a proper NAS with USB storage.

← How To Setup An Headless Ubuntu 12.04 VirtualBox Host With PHPvirtualbox
How to set a static IP Address on Ubuntu Server →

We use cookies on our website to give you the most relevant experience by remembering your preferences and repeat visits. By clicking “Accept”, you consent to the use of ALL the cookies.
Cookie settingsACCEPT
Manage consent

This website uses cookies to improve your experience while you navigate through the website. Out of these, the cookies that are categorized as necessary are stored on your browser as they are essential for the working of basic functionalities of the website. We also use third-party cookies that help us analyze and understand how you use this website. These cookies will be stored in your browser only with your consent. You also have the option to opt-out of these cookies. But opting out of some of these cookies may affect your browsing experience.
Necessary Always Enabled

Any cookies that may not be particularly necessary for the website to function and is used specifically to collect user personal data via analytics, ads, other embedded contents are termed as non-necessary cookies. It is mandatory to procure user consent prior to running these cookies on your website.